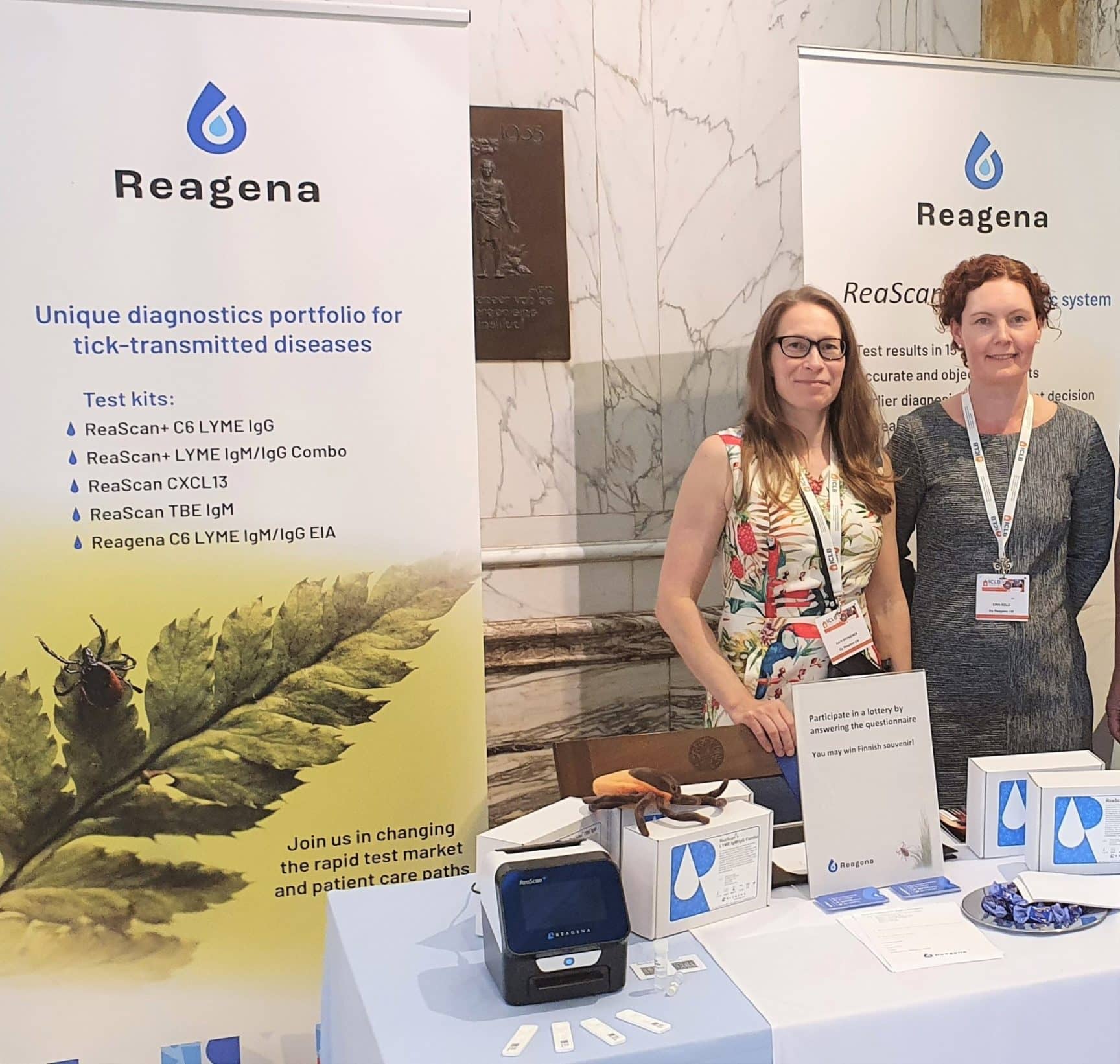 In the beginning of September Reagena team attended the International Conference on Lyme Borreliosis and other Tick-borne diseases (ICLB), which took place in the Royal Tropical Institute (KIT) in Amsterdam, The Netherlands. The conference venue with almost one hundred-year-old beautiful marble surroundings was impressive. Indeed, it was great to participate in a scientific conference after the Covid break and meet the scientists and physicians from all over the world in person.

The scientific program included presentations on tick-borne disease (TBD) experts and the topics covered pathogenesis, epidemiology, clinical aspects, diagnosis & treatment, and prevention. In addition, more than 150 posters were presented regarding the above-mentioned topics. The exhibition gathered only five companies who presented their products to the very enthusiastic audience. Our spearhead products, tick-borne encephalitis (TBE) and Lyme disease rapid serodiagnostic tests, got a lot of interest among the visitors.

Complexity of the early diagnostics of Lyme disease was, like many times before, a topic that caused discussion. Utility of IgM in the diagnosis of Lyme disease was not seen very useful due to its low specificity and the possible persistent IgM antibodies. However, search for new antigens, which could be used for earlier and more specific diagnosis of the Lyme disease continues as reported by several groups of scientists.

Yet, another hot topic on diagnosis of the Lyme disease concerned about question how to make the diagnosis faster without unnecessary delays. Two-tier testing strategy in central laboratories may take several days from sampling to result. One potential foreseen option, which could speed up the process remarkably is testing at GPs with fast and simple devices with very high specificity. This may allow earlier initiation of the antibiotic treatment. According to the scientific evidence*, many rapid tests are comparable to the central laboratory tests in terms of sensitivity and specificity, at least those interpreted objectively with instruments. Perhaps, in the future, the patients get the Lyme disease test result while visiting their GP.

In ICLB, Reagena introduced its new product, ReaScan+ LYME IgM/IgG Combo rapid test, to the international audience for the first time. The design uses two antigens, which detect both IgM and IgG antibodies and conform two individual test lines. The test got a lot of attention from the audience since it can be used for both early and disseminated diagnosis of the Lyme disease.

Reagena is a frequent visitor in the scientific community meetings on tick-borne diseases. This time our agenda also included a quest of collaborators for clinical validations of our new products. Without collaboration with the clinical laboratories, development of new tests is not possible in the era of IVDR. If you are willing to join the clinical validation of Reagena IVD products, just let us know.

Up to Date Information from the National Near Patient Testing Days

To examine a patient with an infection, specialized laboratory diagnostics are often required,...

The importance of rapid tests will increase in the future

Animal-borne diseases are becoming more and more prevalent around the world. The best known...

Reagena rises to the challenge of diagnosing diseases spread by ticks

As spring turns into summer, the familiar debate about ticks begins again. At the same time, we...

Reagena is going through a process of renewal in which digital business development will play...